Bringing Ideas To Life At 24 Frames Per Second 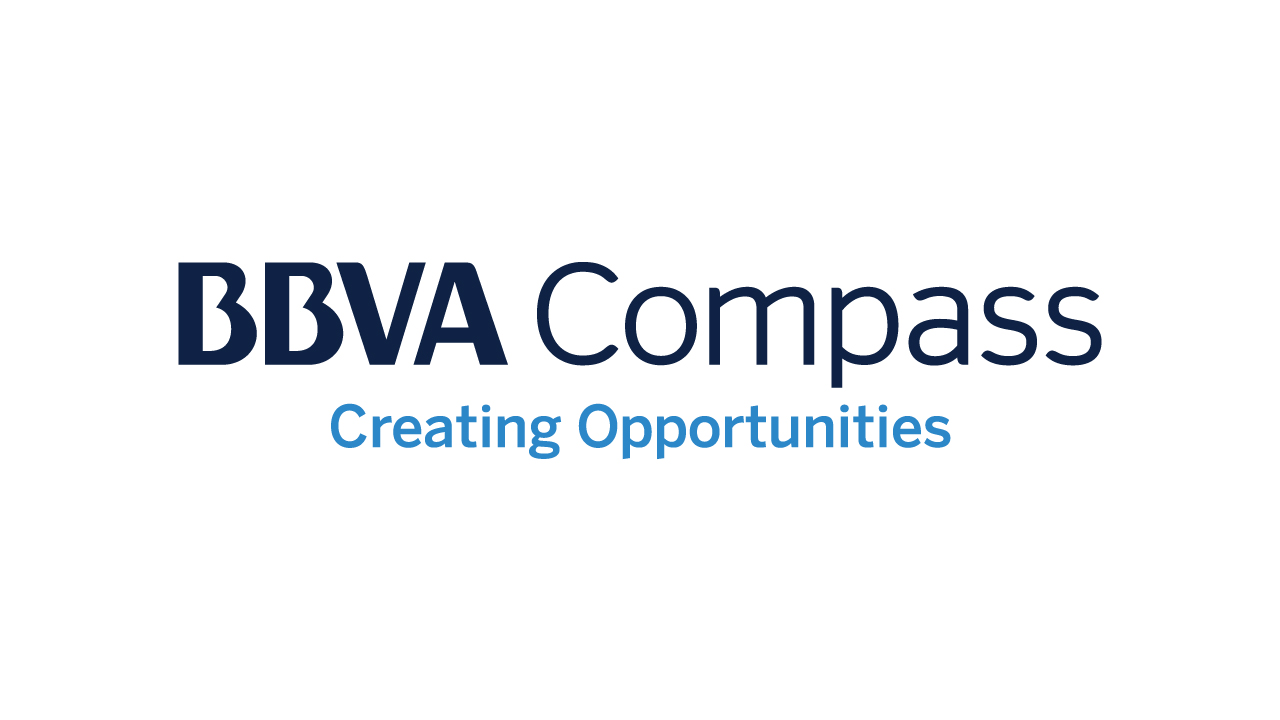 Leading a super talented media team ushered in a terrific opportunity to evangelize the impact and value that video brings to the world of UI & UX.  Leveraging motion graphics and video production acted as a spring board for teams to turn static UI/UX designs and concepts to life by injecting character, high production value, and narrative, which allowed stakeholders to see firsthand the flow of a design, the animated behavior of its elements, and push the envelope to entertain certain ideas previously thought “impossible” – as possible.  The following samples illustrate just how much of an important role video / motion graphics plays not only in a UI/UX environment, but representing a multitude of capabilities & business areas throughout the company.  A shout out goes to DJ White, Andy Allman, & Nick Goodrich, who each contributed to the making of the videos below.

Create animations for layout transitions, modals, and UI assets in general to be implemented by back end / front end development.

Fabricated videos for prototype teams showcasing how a final product might look in order to get buy in from key stakeholders.

We partnered with the CSR department to build awareness of how BBVA Compass invests and helps local communities.

Chronicling product updates and profiling meaningful contributions key employees have made to both local and international communities.

It’s an exciting moment for a team to release their product; we provided high production value launch videos.

Forging a script is the foundation for storyboards, which go through multiple iterations until the stakeholder’s vision is defined. 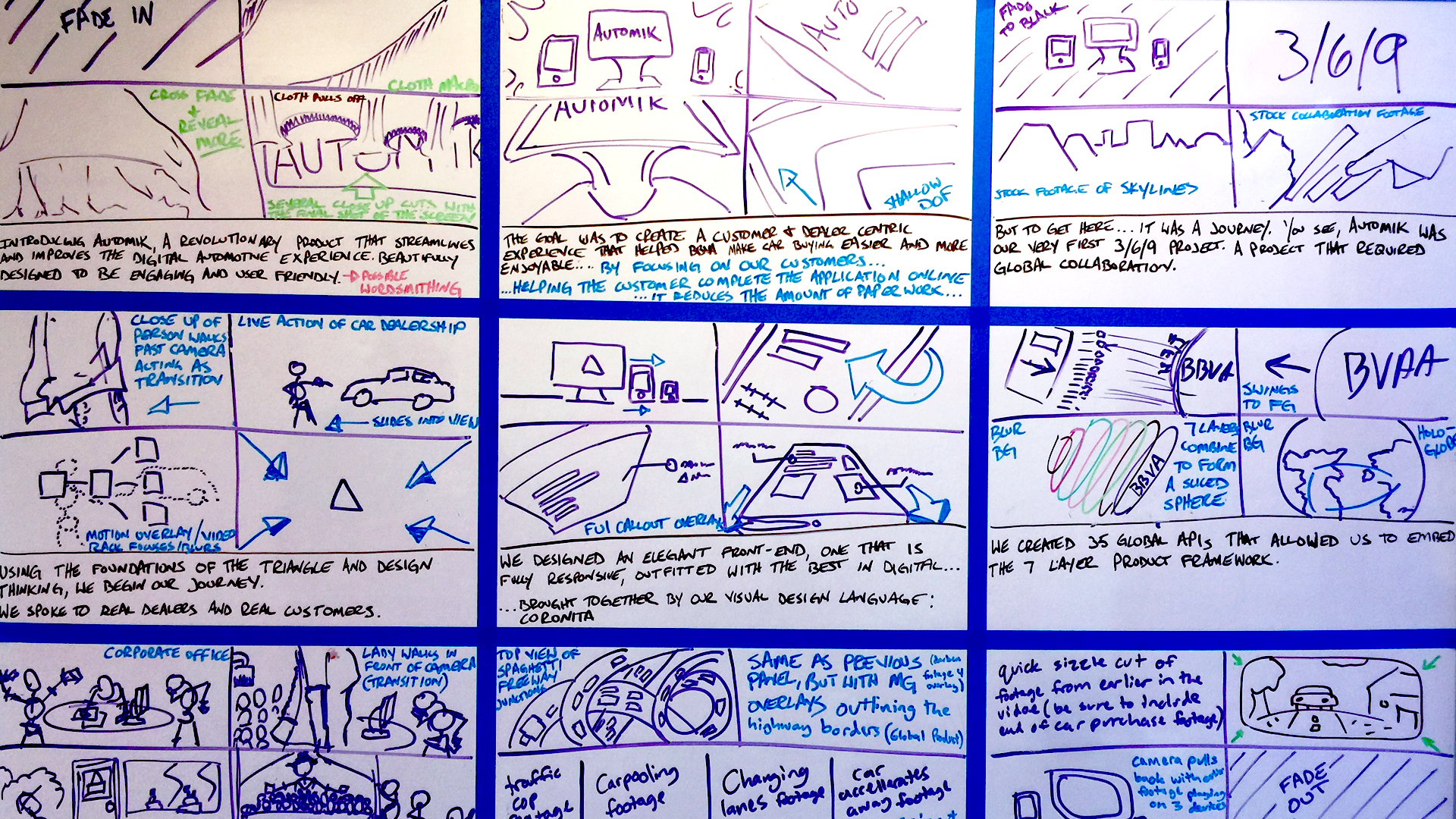 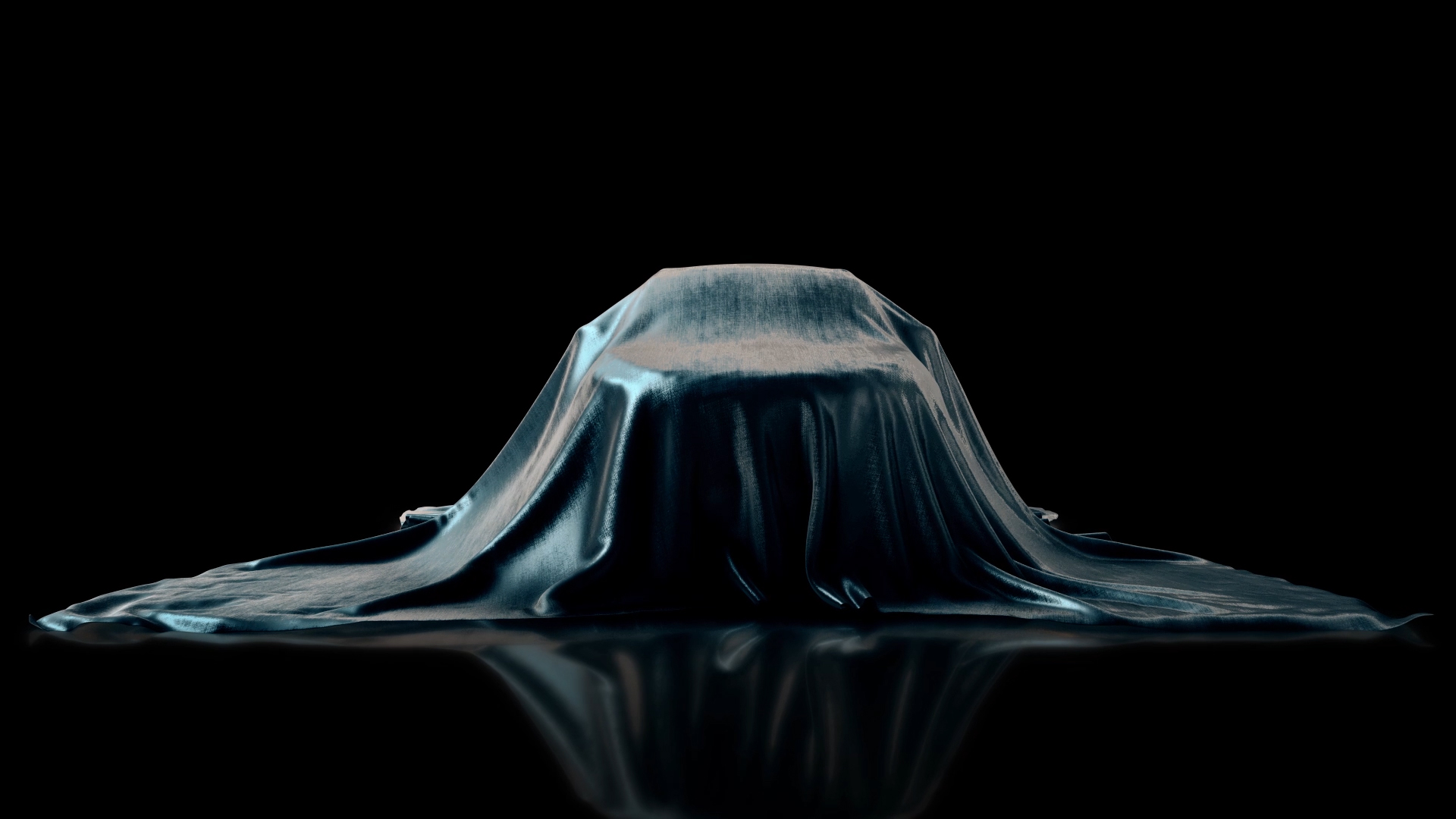 Whether it is a 2D/3D motion graphics animation or live video production, we deliver high production value on time, every time.

The First Step To A Great Idea:

Great ideas can come from anywhere, but how do we successfully execute them? Creating a group of persona archetypes generated from real world data provides a foundation for teams to champion the end user. 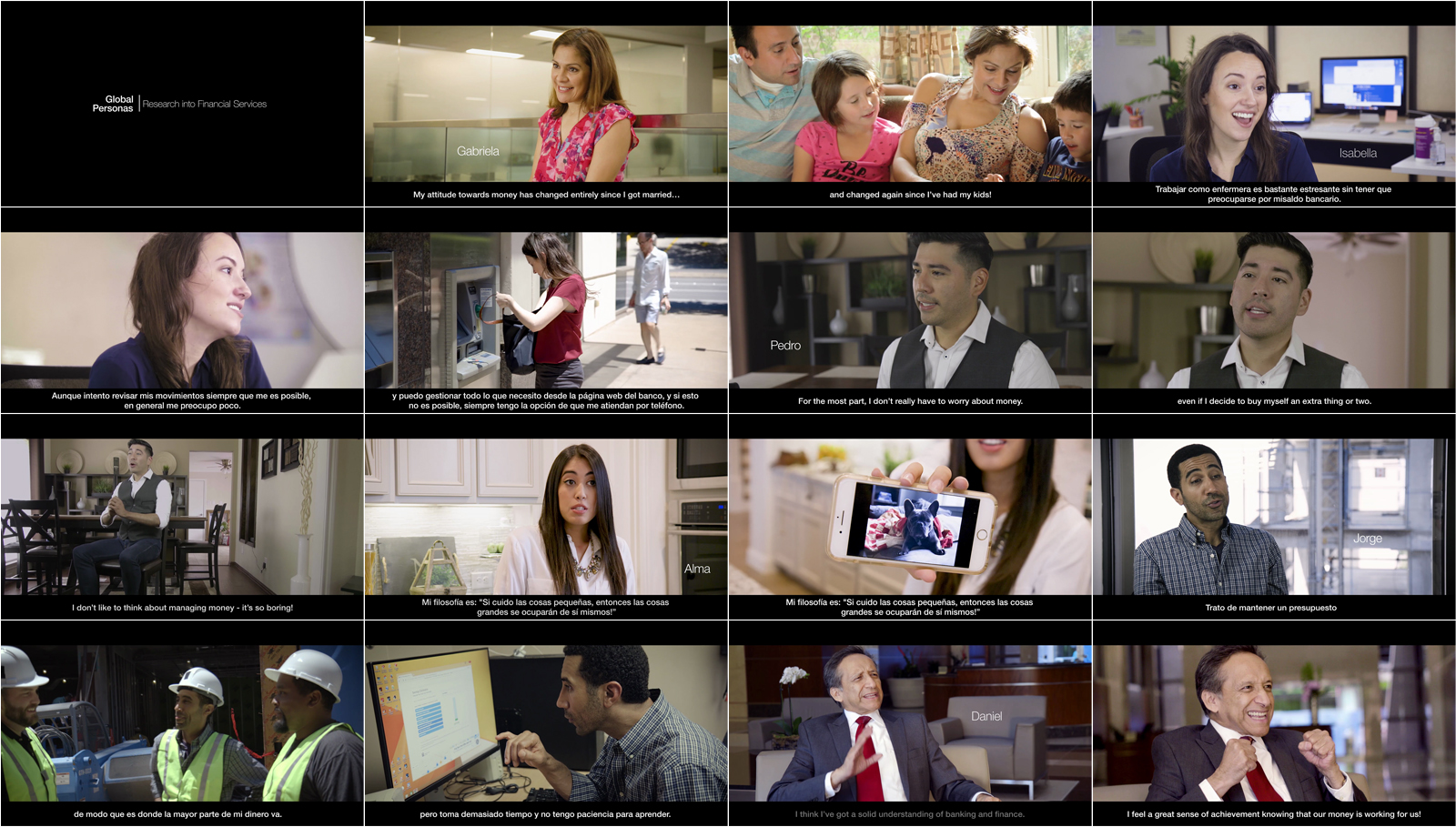 These Were Used For Global Projects 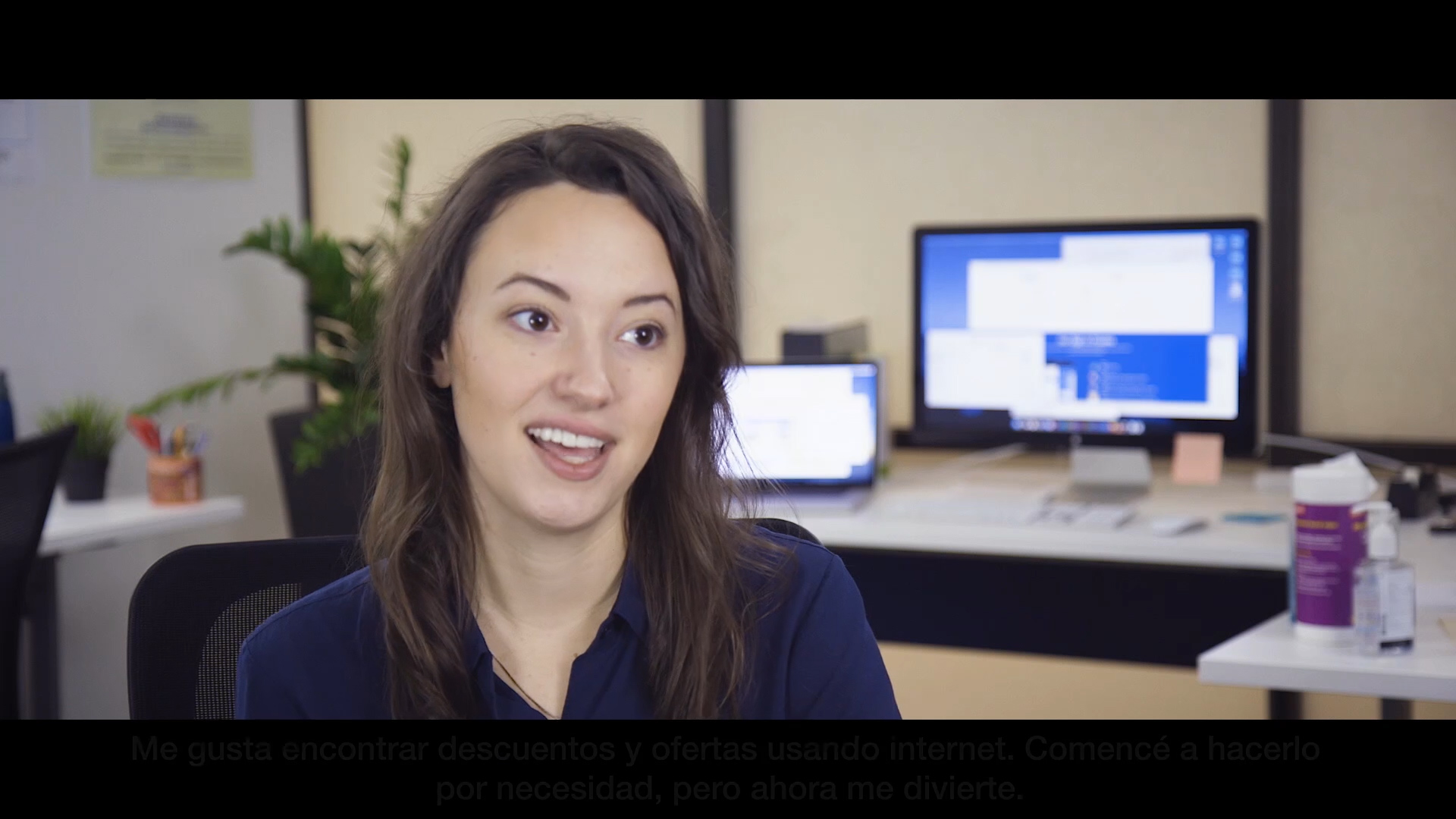 “I’m good at budgeting, but I want to live beyond simply making ends meet.” 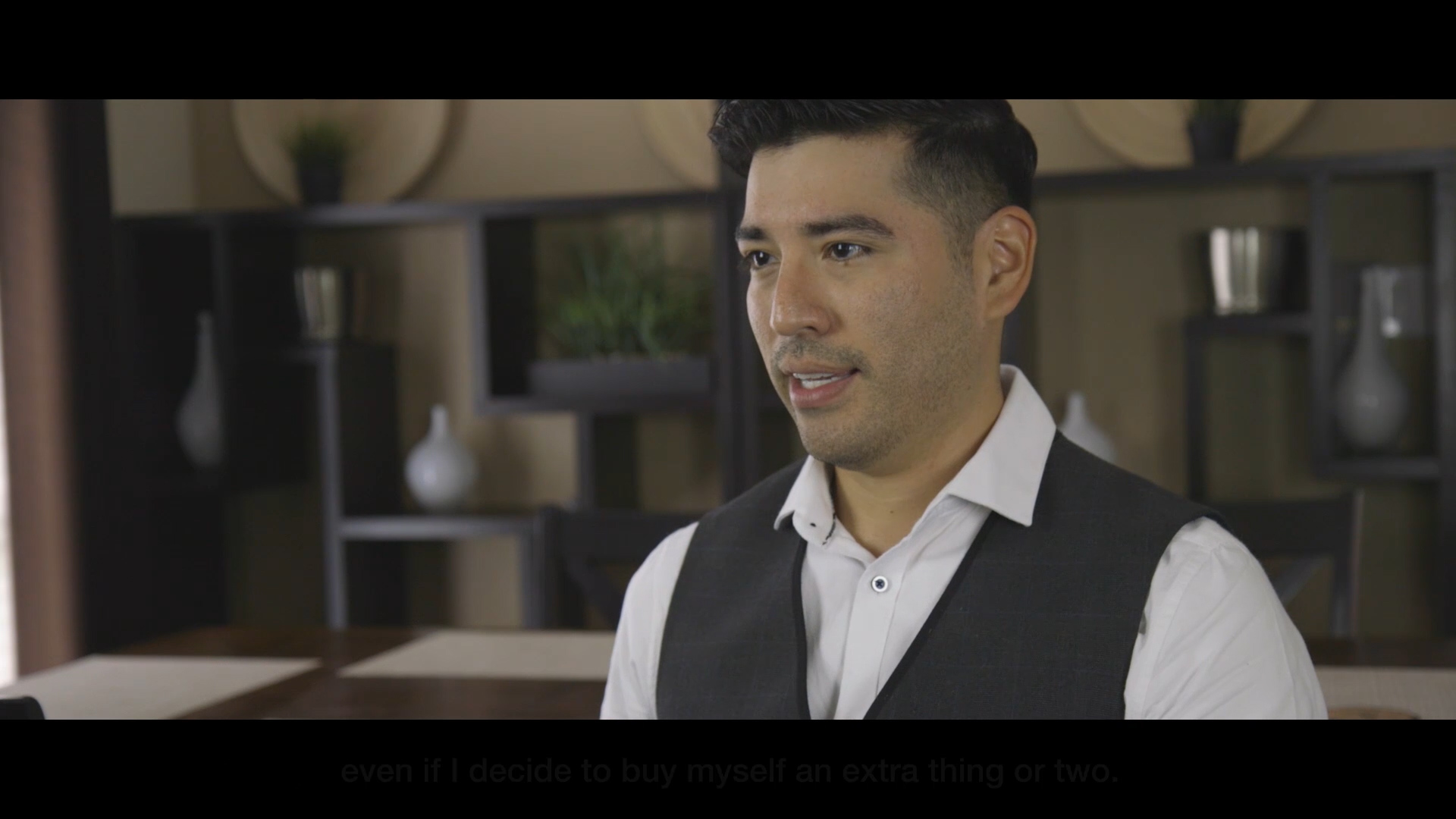 “You only live once!  Money is for experiencing life to the fullest.” 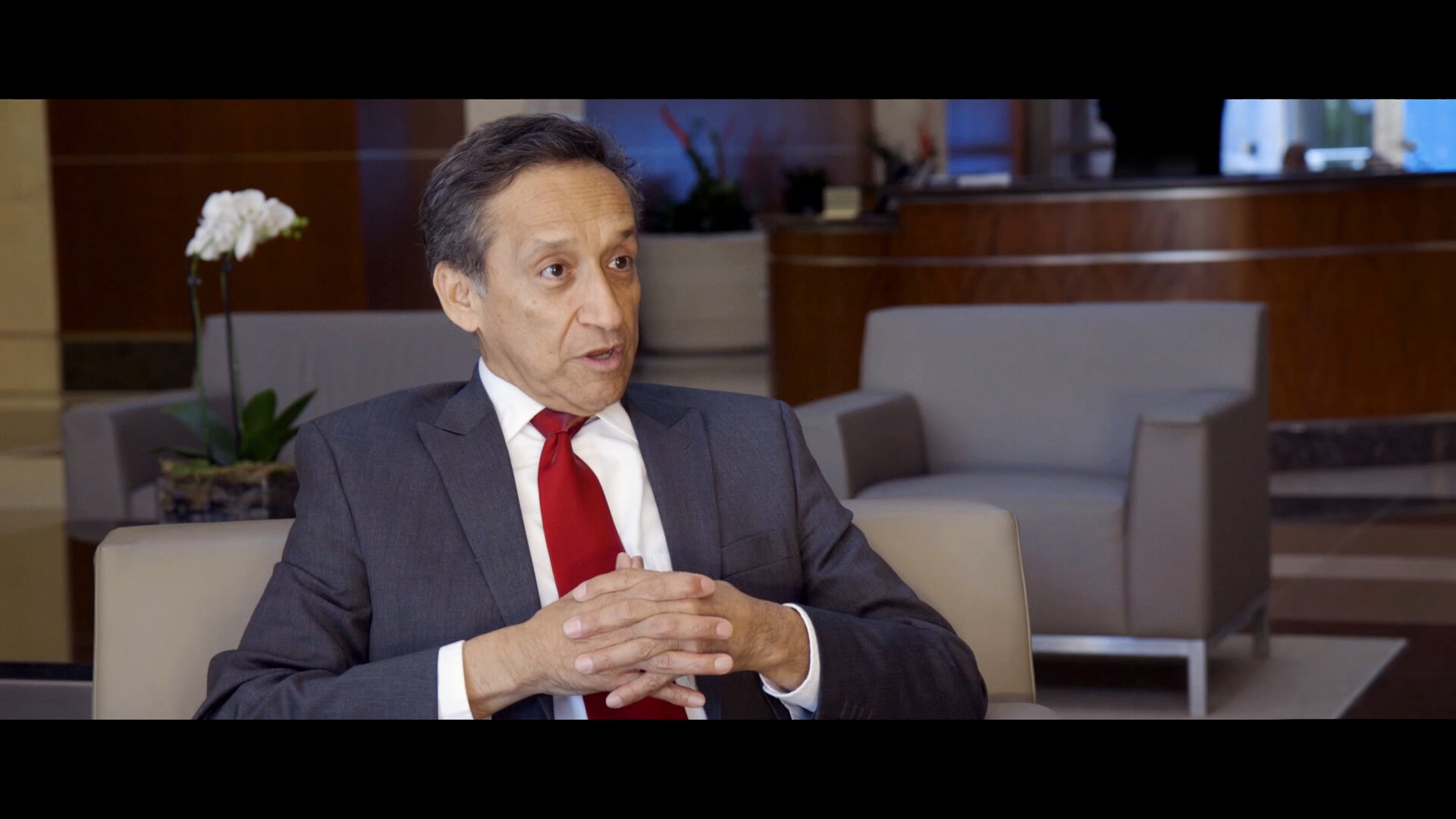 “I enjoy planning and managing my finances.  I’m on track to reach my goals.” 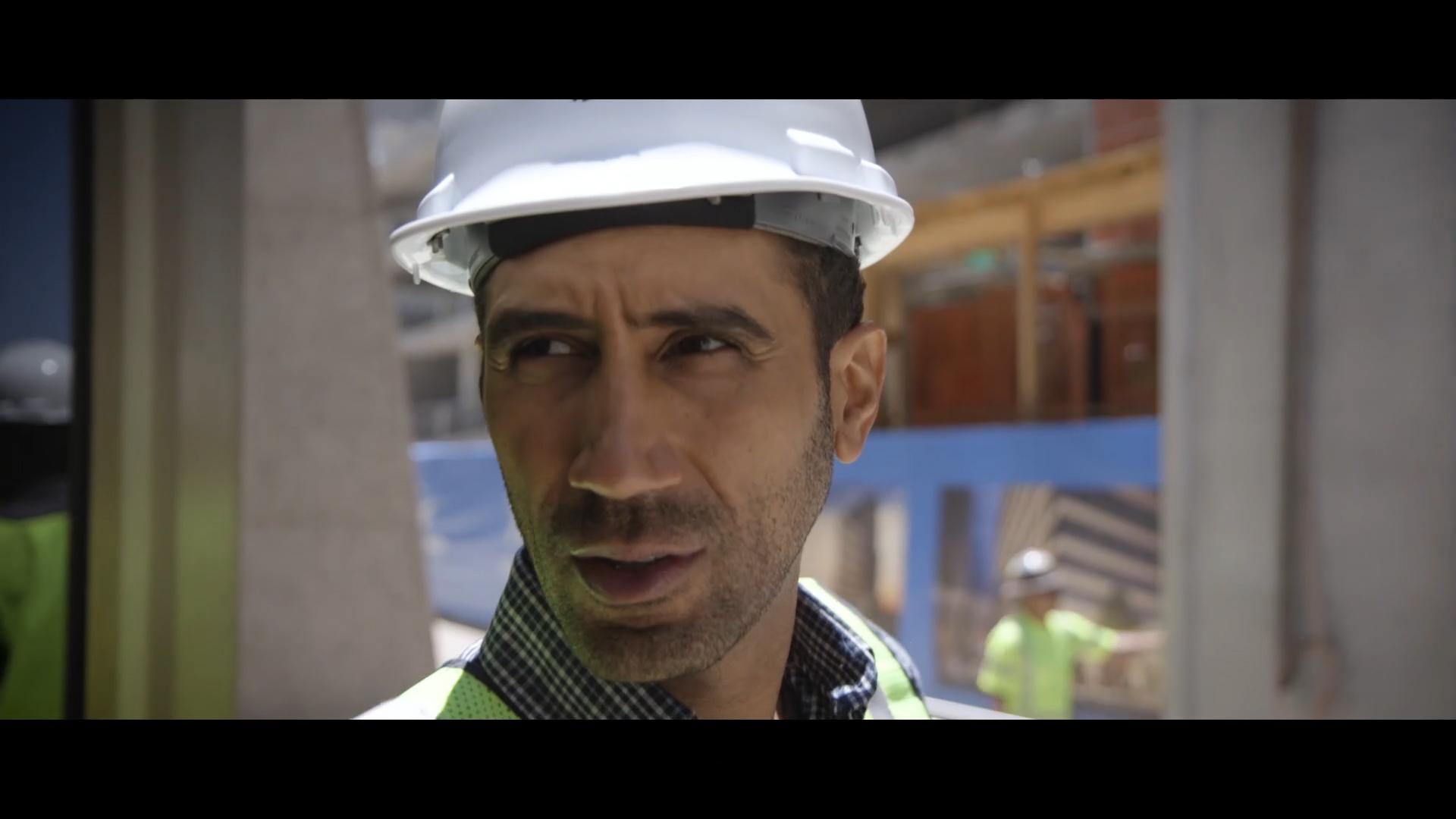 “I earn enough to get by.  Surprise expenses make it hard to get ahead.” 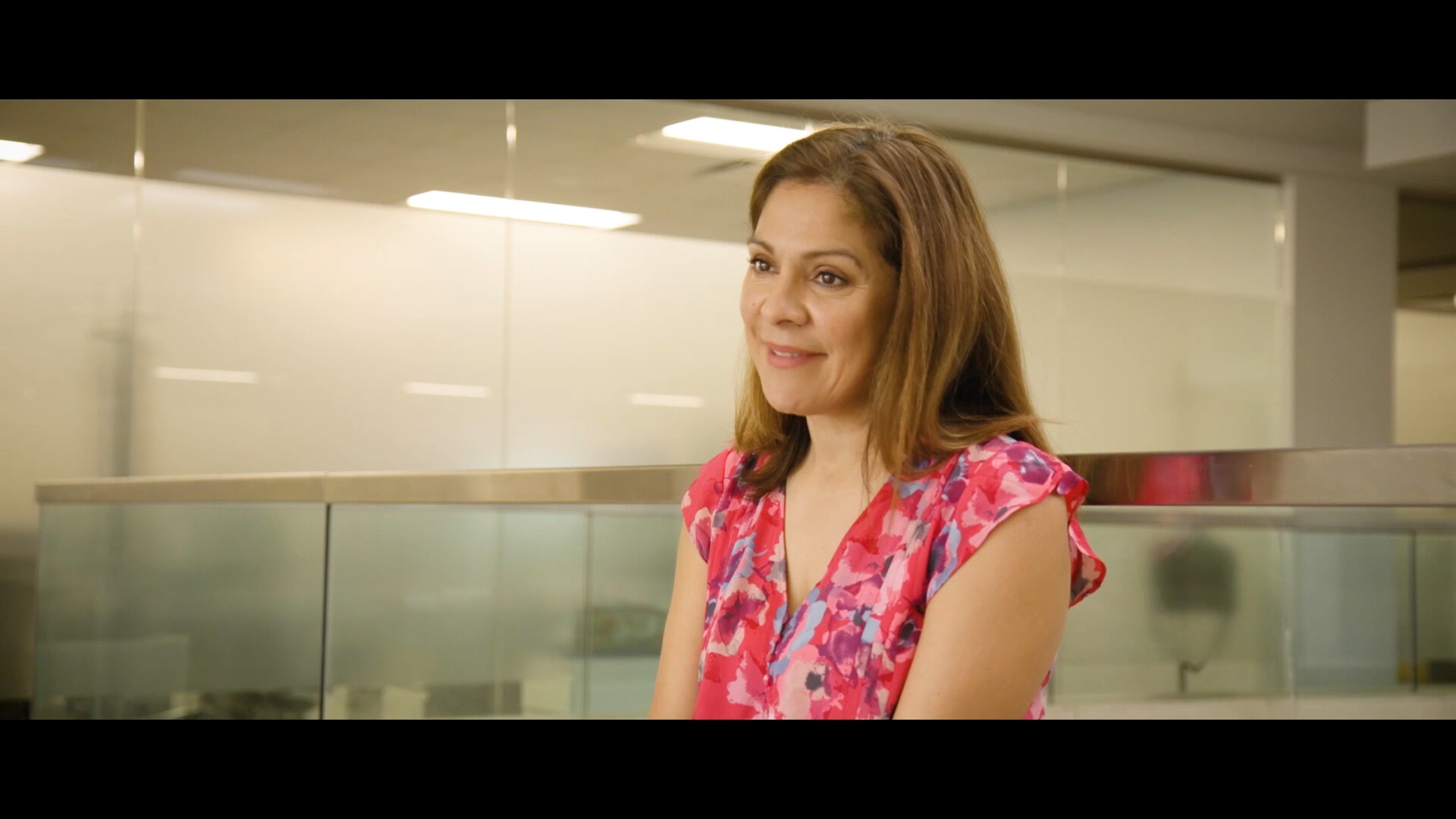 Check out Kevin treck some of the most intense courses in all of the Salient area.

A new global product was on the horizon. Colombia hosted our workshop – inviting designers, engineers, & business dev from 6 countries to collectively define the vision.

The Persona videos were used as a fundamental starting point for almost every product within BBVA.  They represented a healthy mix of current and potential customers in terms of what their interests, needs, and mindsets are. This approach proved to be invaluable – regardless of which product was in development.  Using the Personas helped lay the foundation for a product by getting the Designers and Engineers headspace into the mind of their customers, making the end result that much better.

It was a truly beautiful thing watching how over the span of one week, folks from 6 different countries from around the world, who didn’t know each other prior to the event and come from very different walks of life, find common ground in the universal passion for good design.  Critical thinking and outstanding ideas were shared, causing a person from one country to expand upon an epiphany by a person from a different country.  Creative synergy manifested organically through this process, which ultimately created a roadmap and scope that everyone could get behind.

Designers & Engineers from Spain, Turkey, Mexico, The United States, Colombia, and Peru came together with one goal. 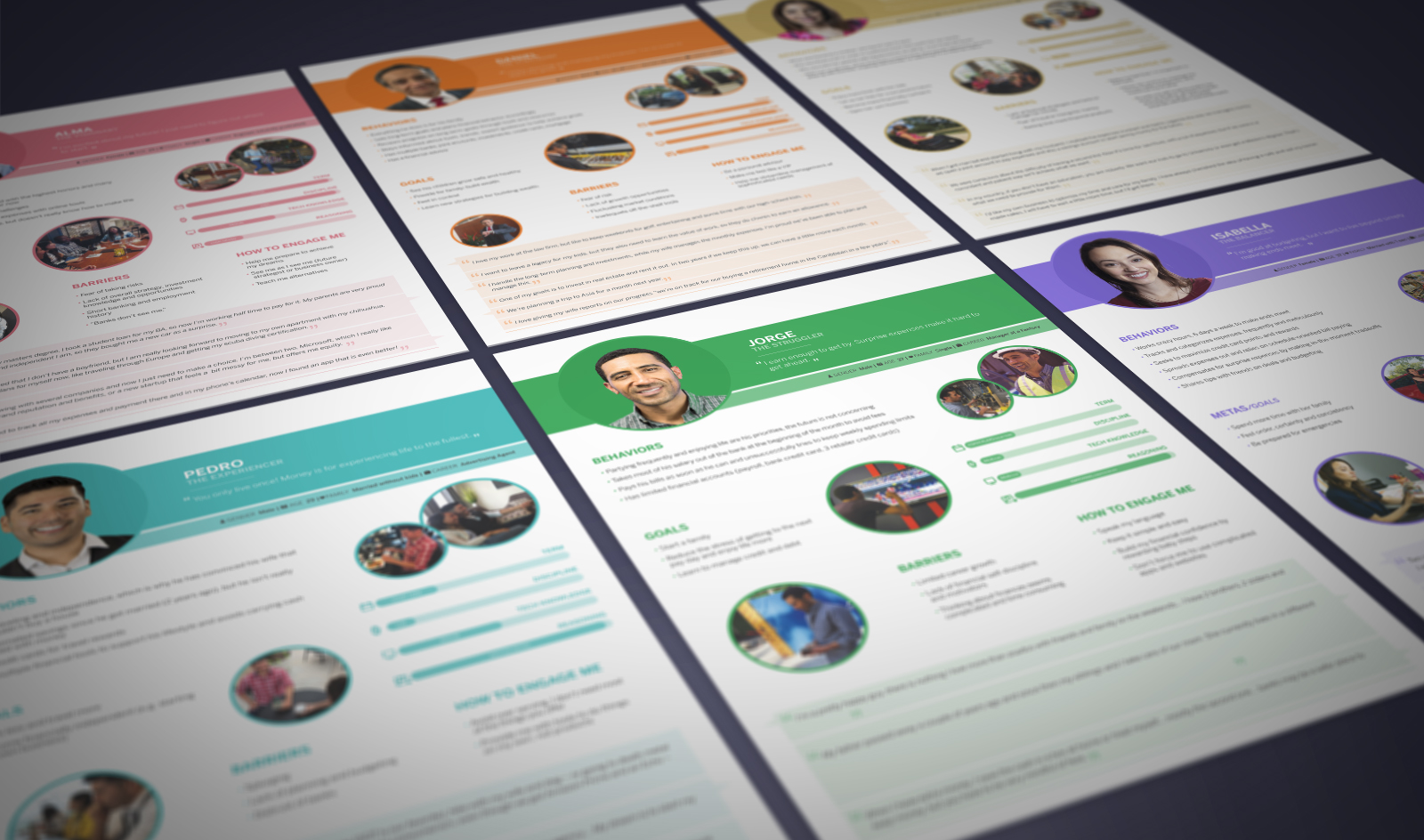 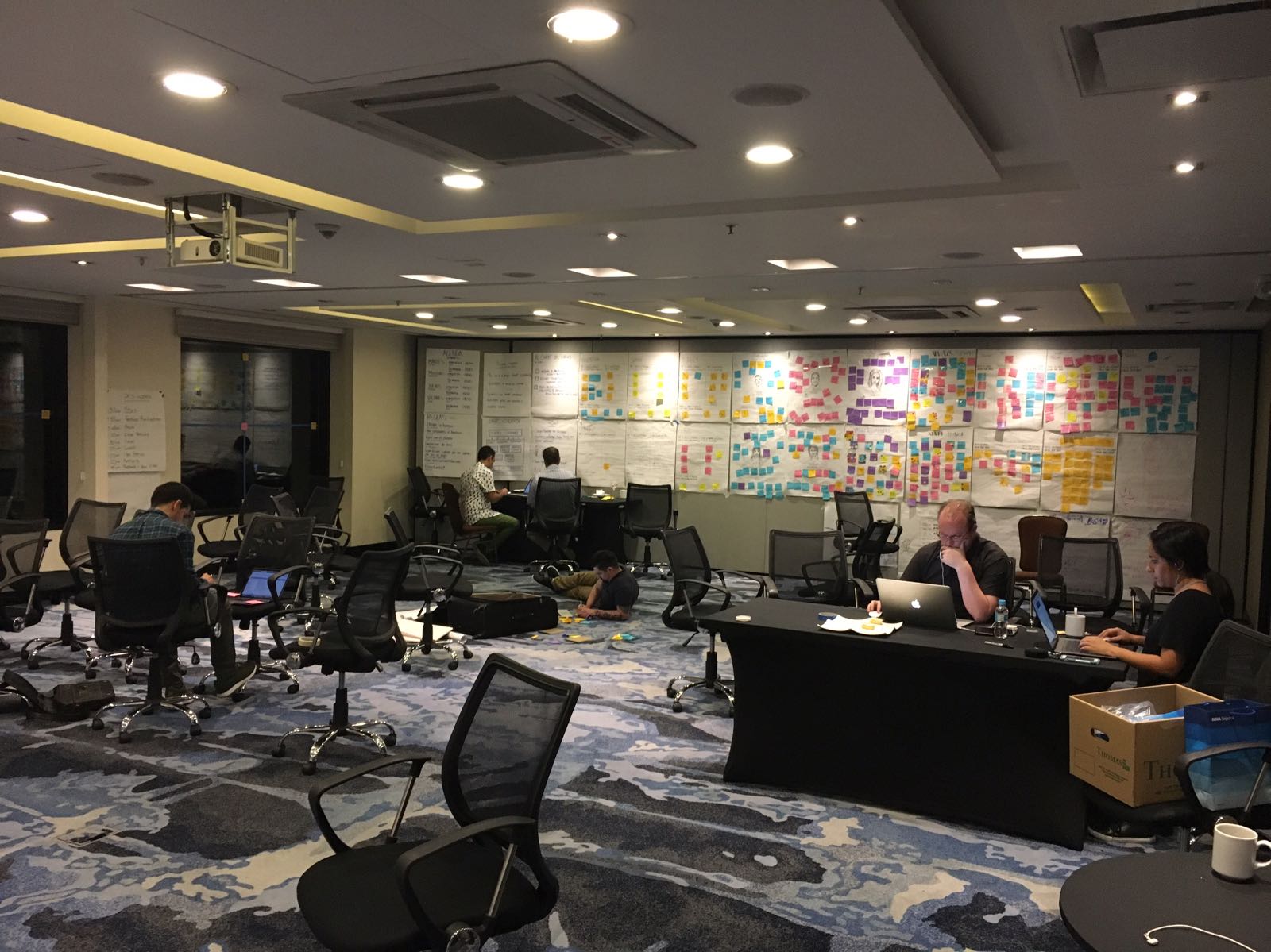 At the end of each day, we catalogued the contributions from the team.

We developed a prototype in tandem with the team’s concept ideations.

A Penny For Your Thoughts

The workshop produced many ideas & solutions, helping to define the roadmap of the global project.

Sometimes the best workspace is the floor. 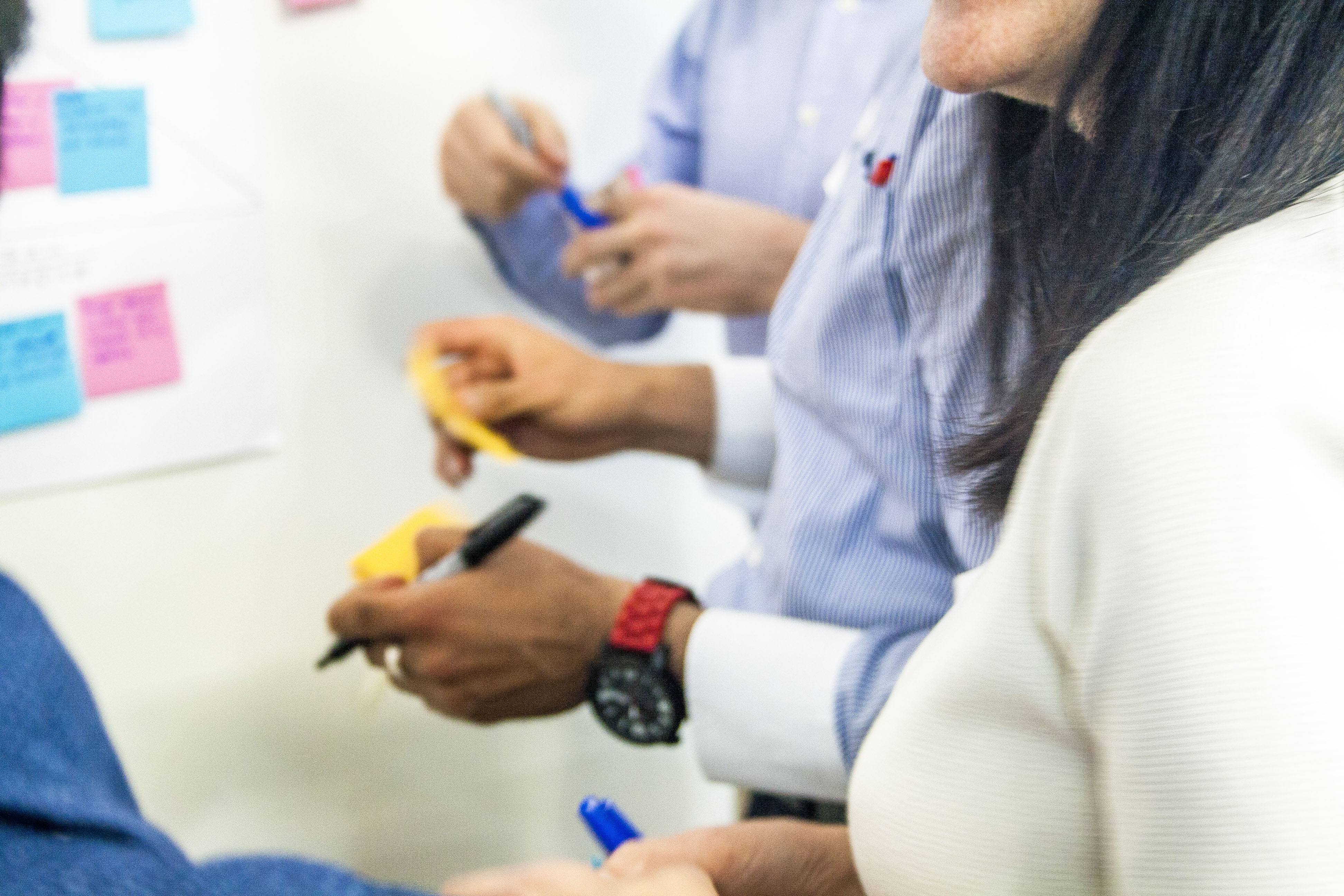 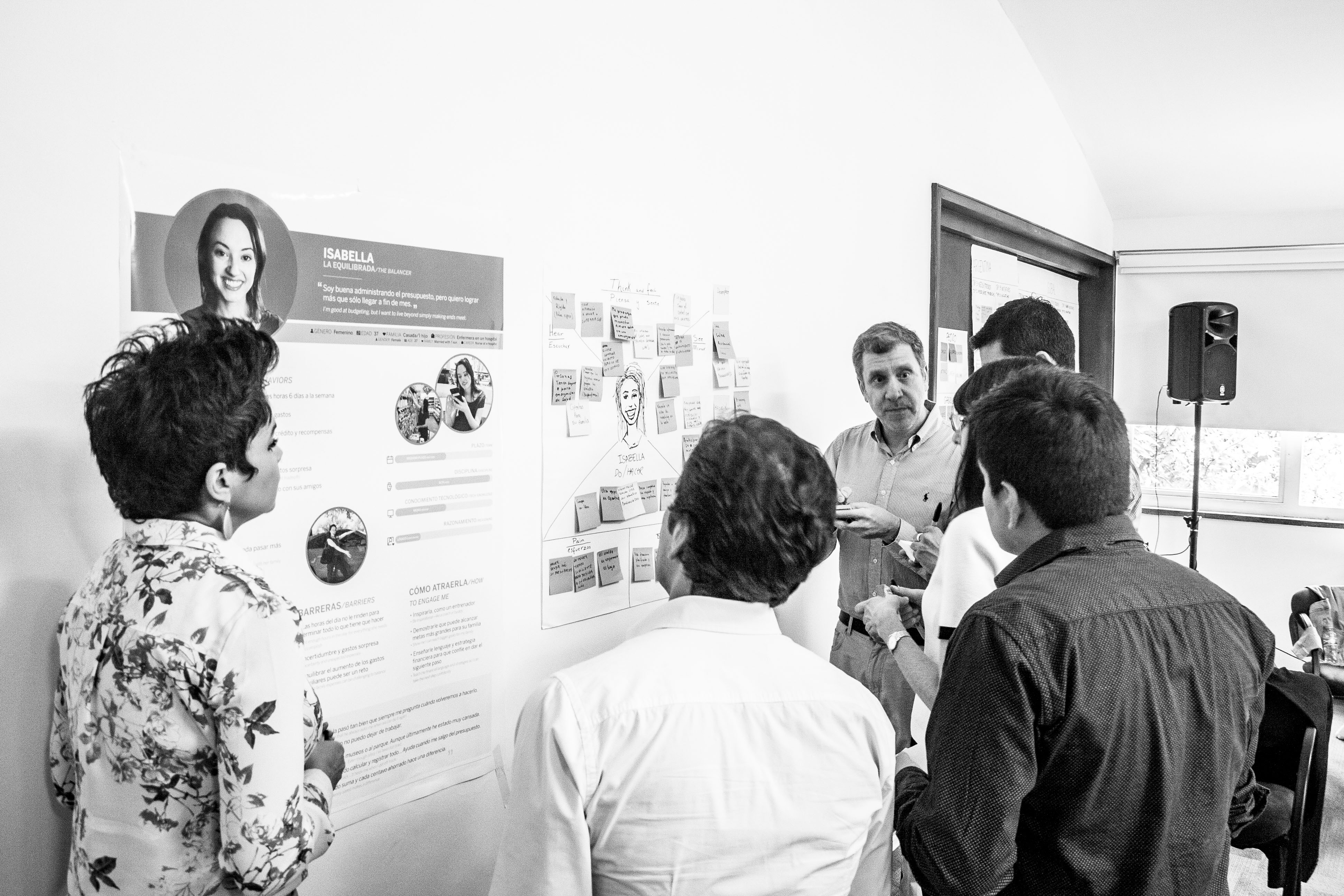 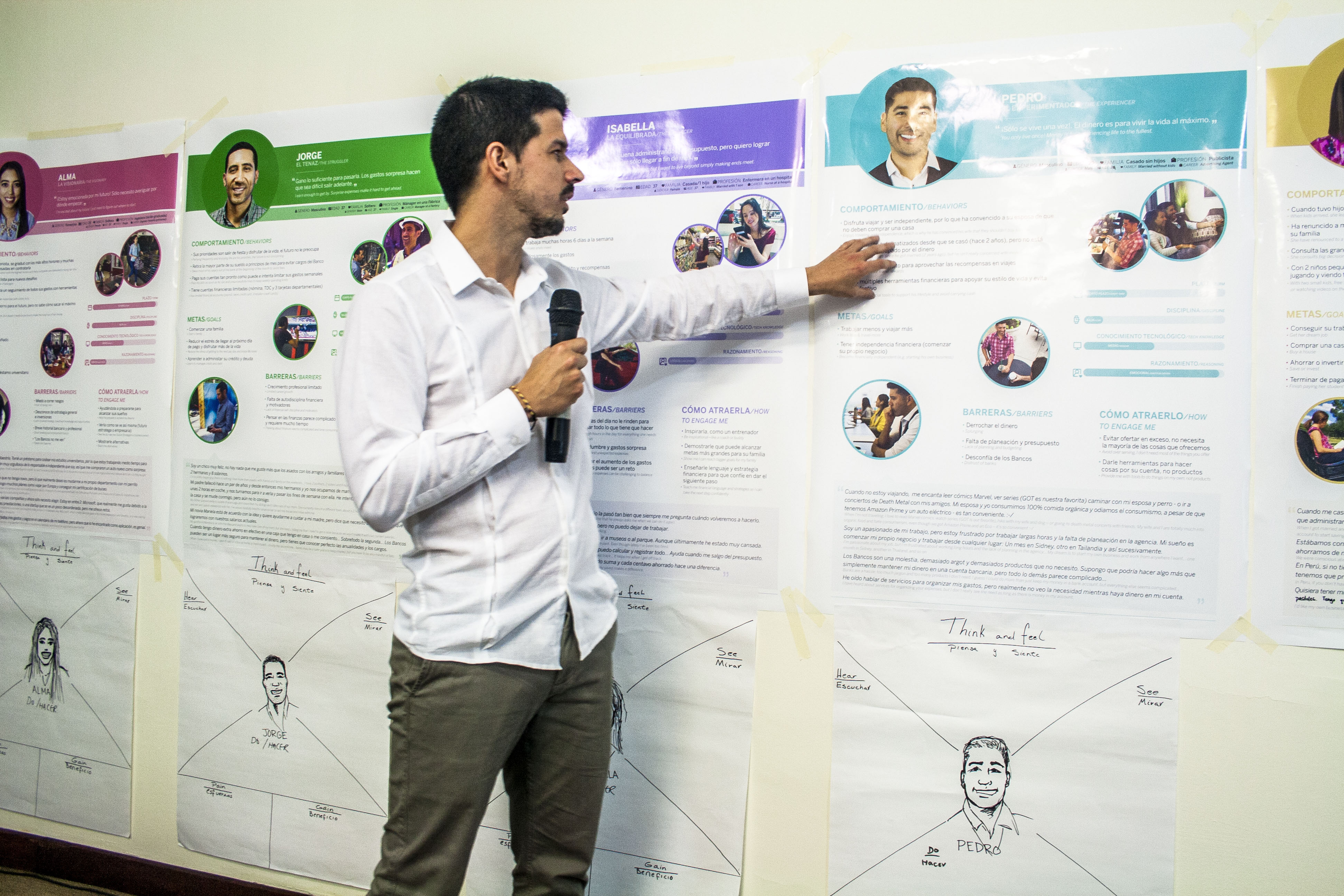 It was my first time traveling to South America, so I packed my personal camera and was excited to document the experience.  Bogotà is a high-altitude location, with parts of the city nestled into the surrounding mountains.  Being from San Francisco, I was surprised to find geographical similarities that the two cities shared; they both reside in hills, have a pleasant breeze that sweeps through the city, and the smell of Eucalyptus trees reminded me of home.  I had one free day to explore and below is the result.

The global team was excited to launch their automotive loan app and needed a video to commemorate the occasion.  The request included having production values that were “Apple commercial quality”, which made for a fun creative challenge.  The media team got to deploy our creative wheelhouse, which included motion graphics, 3D modeling / animation, and video production.

BBVA partnered with The Museum Of Fine Art Houston, investing in MFAH’s plan to build the Glassell Art School.  It was designed as a central hub for folks in Houston to get together, take classes in various courses, feature rotating art exhibits, and enjoy a panoramic view of the city.  BBVA paid for the panoramic view; dubbed the “BBVA Rooftop Garden”, it sits approximately three stories tall.  We flew down to cover the grand opening of the facility and interview the BBVA Compass CEO, MFAH director, and some of Houston’s residents on what this new addition means to them.

Banks are known to be financial institutions where people can park their sweat equity as well as take out loans, but what else do they do?  Three years ago (as of this entry), BBVA started an initiative called “Momentum” – an opportunity for small business owners to partner with the bank, each be assigned a professional mentor from the bank, and possibly win a monetary prize.  To help build awareness for the program, my team profiled the winners from year two & three. 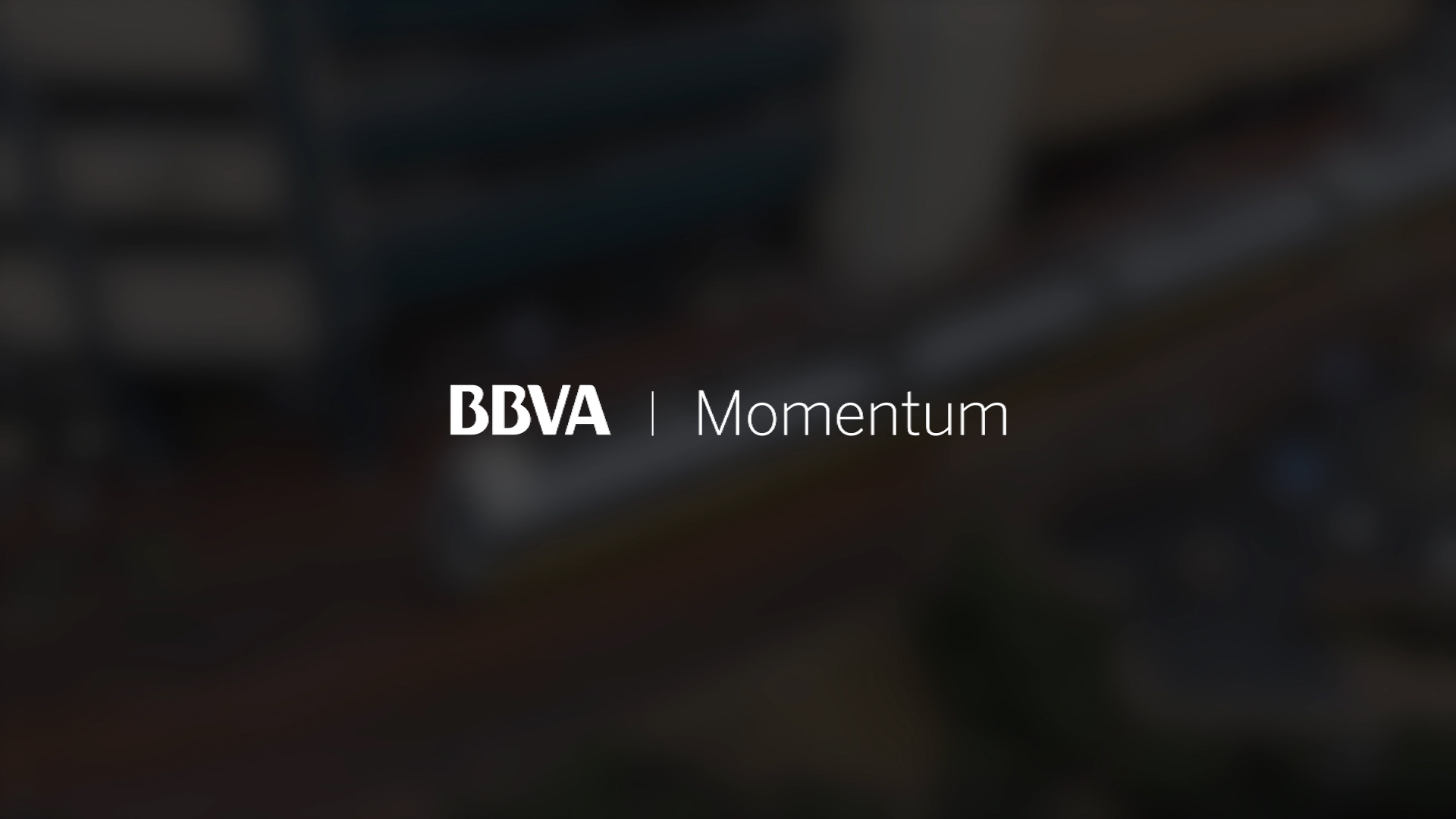 “Café Momentum is one of the top restaurants in Dallas, but more importantly, it is a post-release internship for young men and young ladies exiting Dallas County juvenile detention facilities.” 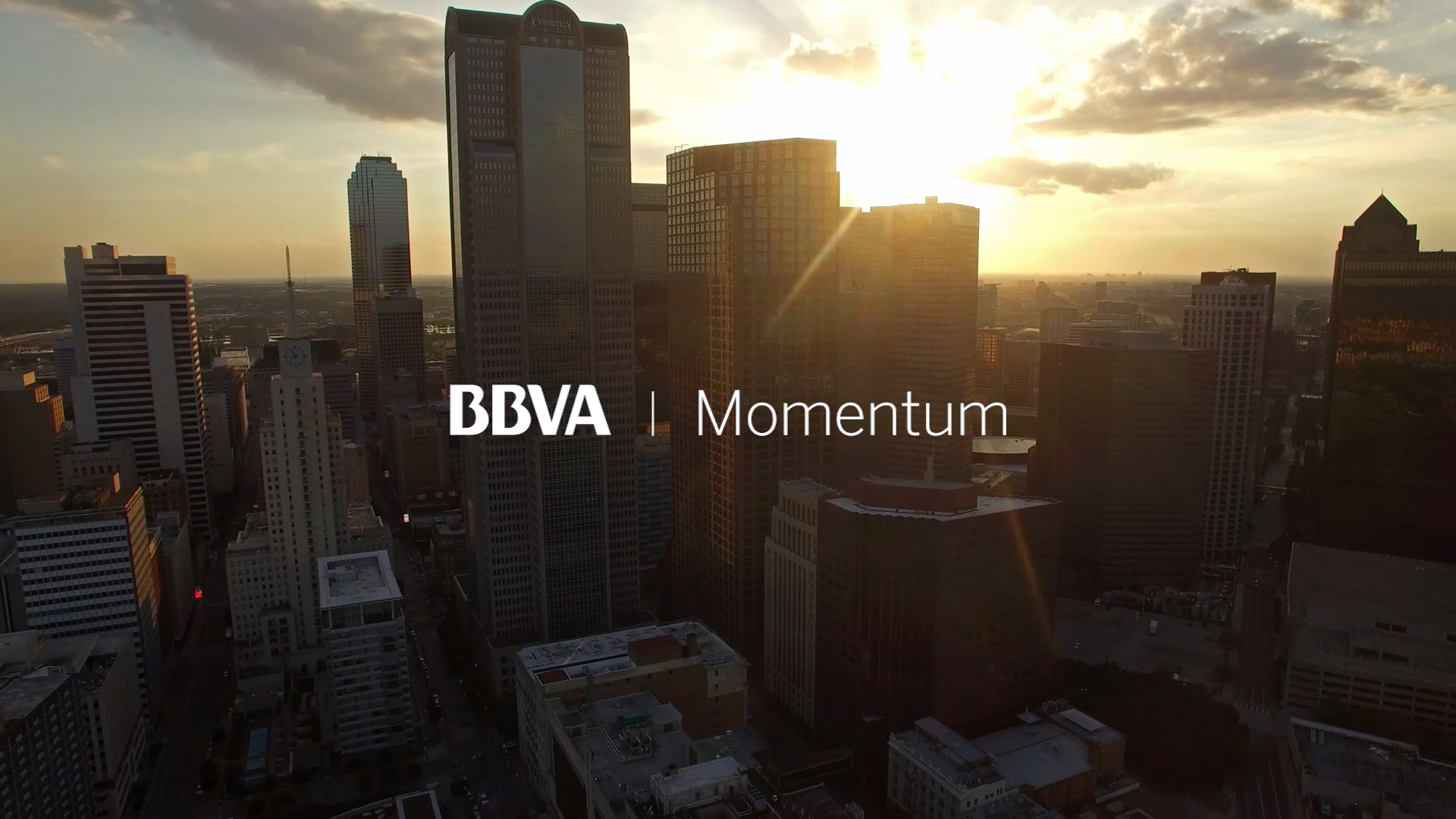 “We make affordable car loans for working families so that they can access jobs, lead a healthier life, and avoid predatory lenders.”

BBVA has many global products that are at various stages of completion.  Often times, projects that are in the beginning stages need approval or buy in from key stakeholders.  We facilitated some of those needs through motion graphics, taking a verbal idea and turning it into an easy-to-digest visual presentation. 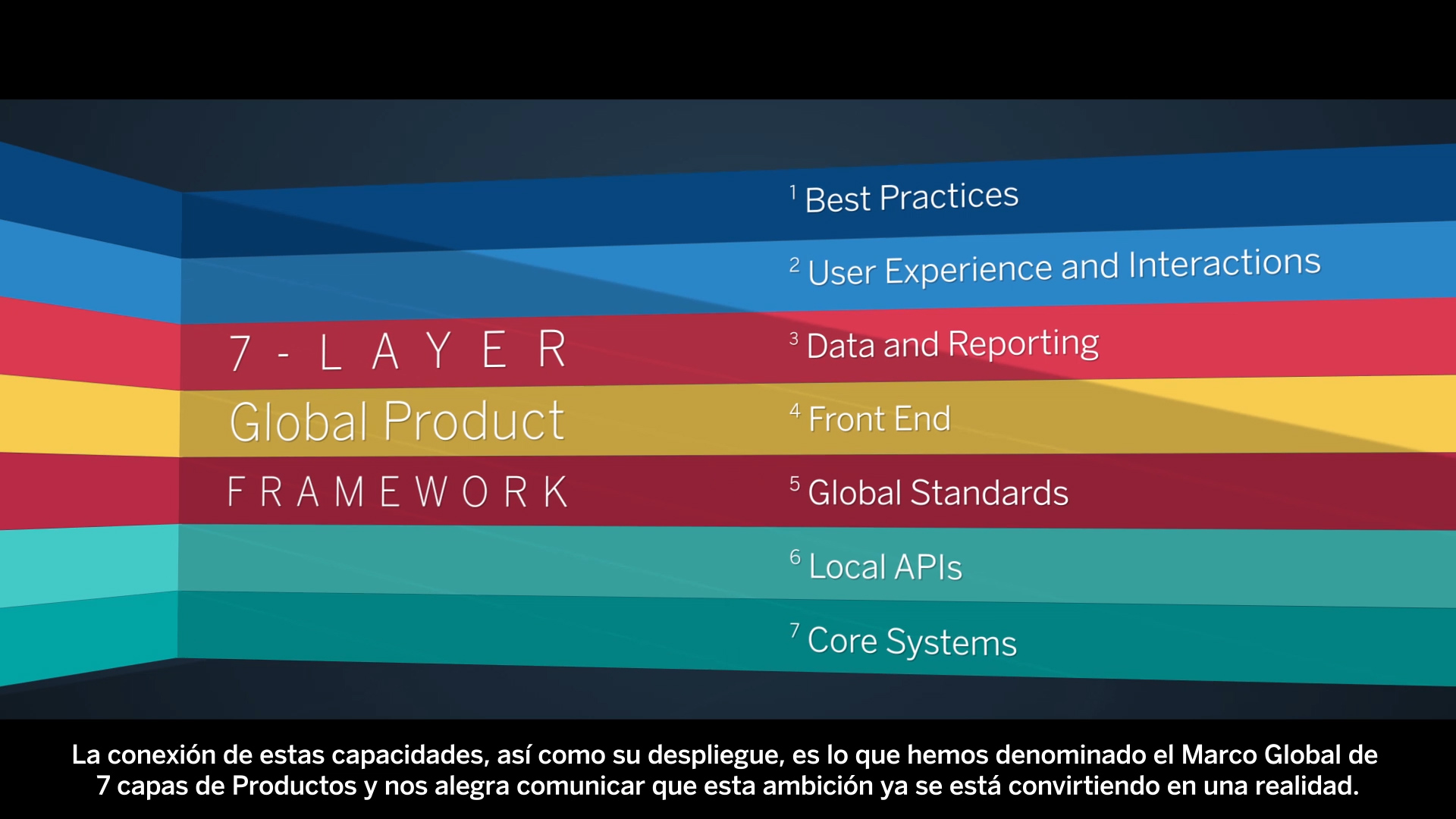 “We’re using a product driven approach to deploy the 7 layers in all our countries as quickly as possible.” 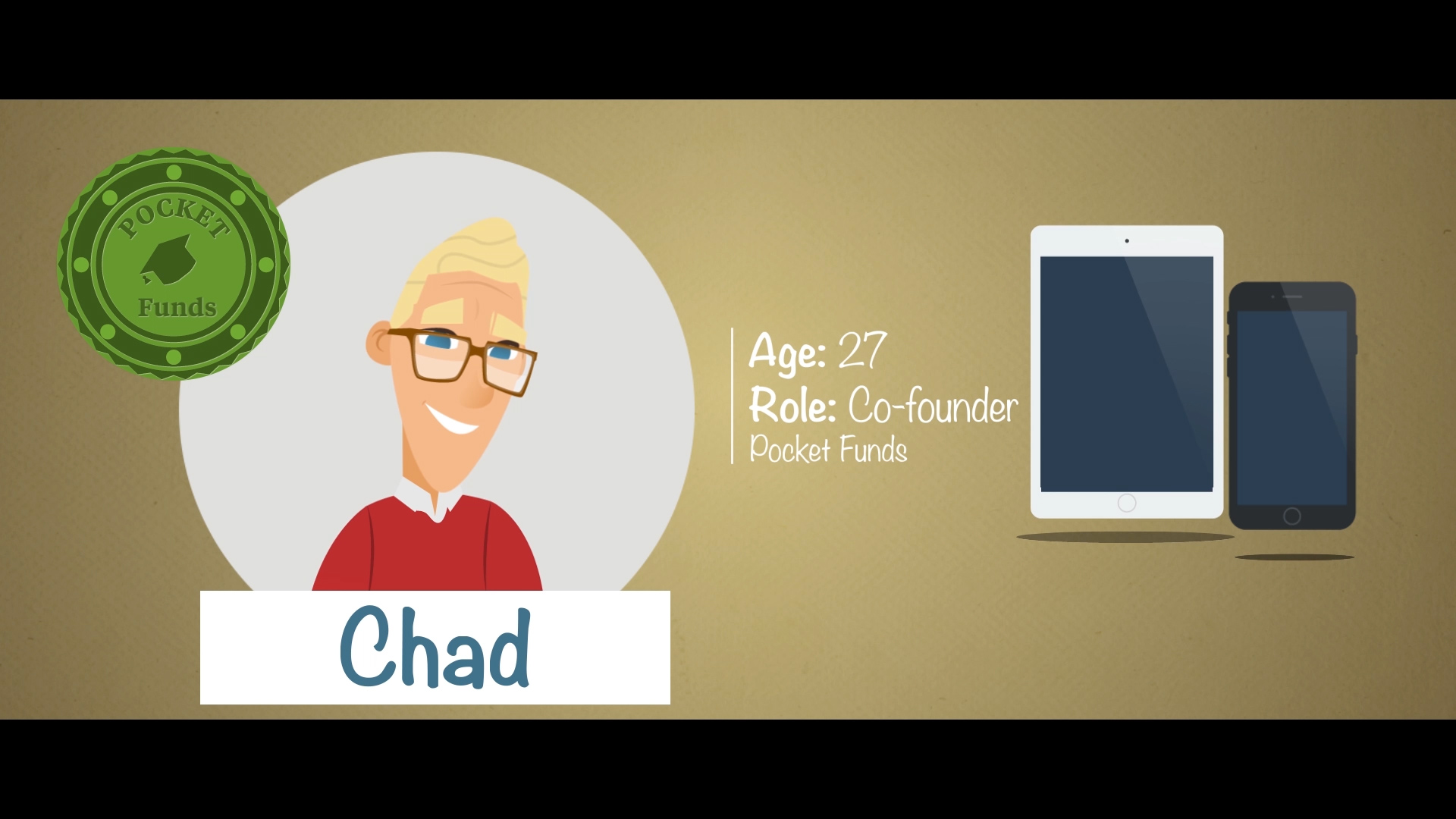 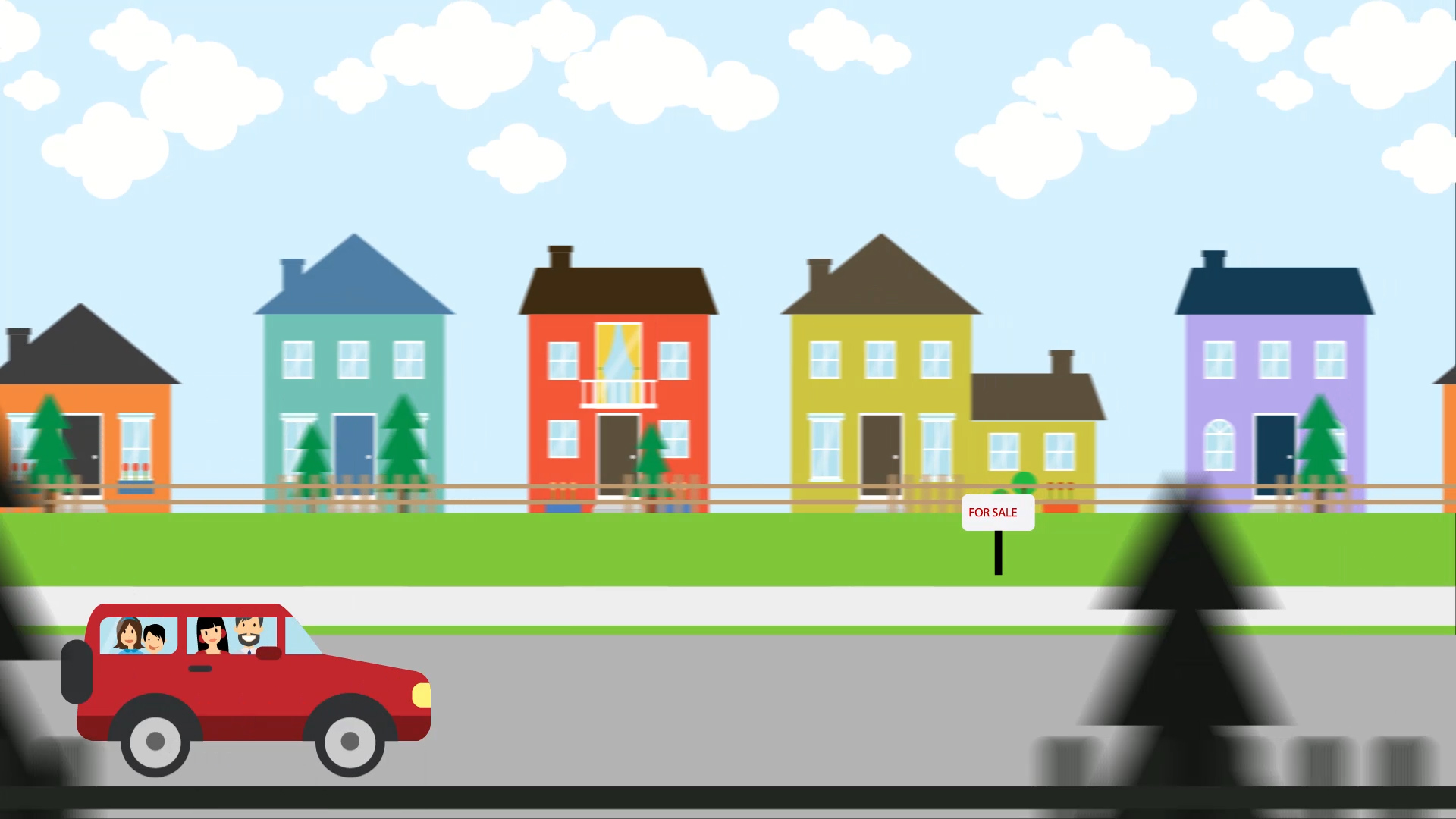 “Buying a house is a big decision.”

One of the most enjoyable assignments to come across my desk involved flying to New Mexico and doing a profile on Kathleen Fennell, who has been an employee of BBVA Compass for over 40 years.  I am a firm believer in the notion that a company’s soul is personified by its staff – without them, all that is left are essentially four walls and a roof.  Therefore, I was very excited to meet Kathy and learn about her professional contributions.  We only had one day of production to tell her story, but it was a fascinating one that included her passion for volunteer work in multiple organizations, how the company’s “think big” motto allows her opportunities to contribute beyond her daily tasks, and her being a hot air balloon pilot!

Halloween is a big deal at the office.  Over the course of a month, employees changed their spaces to coincide with the theme that got voted on for that particular year as well as put together fun costumes to wear.  It provides an opportunity to tap into other creative outlets one has that normally don’t get exercised, which combined with terrific themes, makes for a satisfying team building experience.  It was fun for me to create motion graphics promotions for each event that circulated throughout the company.  I also provided the VO for the example below.  Underneath the video are pics of my costume fabrication of Luxo for the Pixar themed Halloween party.

Russ is a great visual designer and motion graphics designer. He created motion graphics prototypes for a variety projects across our lines of business. Everyone always stopped while walking past his desk to admire the coolness of his work. He is a pleasure to work with, he always creates top notch work and delivers it on schedule!

Russell is truly a jack of all trades. He's a one-stop shop for all things creative from creating animations, to videography, to photography, to UI/UX, to prototyping, to graphic design, and he can write too. He has a passion and love of design that is simply unmatched. A passion that is reflected daily with his work ethic; and the highly conceptual and innovative designs he delivers with ease. He is truly a joy to work with and will enhance any work place, all while inspiring others to be great!

Russ is a design powerhouse. Not only does he create beautiful designs but his knowledge of video animation and ideas on how elements can move about on a screen are really sleek and smart. He is very personable, a team player, an avid learner and a great colleague. I have enjoyed working with Russ and I believe he will be a valuable asset on any team.

Having the pleasure of working with Russ, I got to see the high level of skills he has in design and prototyping. He is capable of creating beautiful graphics that lead into amazing animations videos and delivers the clients exactly what they want. He is funny and charismatic, while also showing a level of professionalism that cannot be acquired elsewhere. I aspire to be able to develop digital designs like Russell and with no doubt I think he will be a great asset in the digital and design industry.

I have not worked much with Russ directly, but he does the type of work where I have stopped on multiple occasions to ask “Wow, what is that you’re working on!?” The video animations I have seen from Russ are complex, professional, polished and were great in demonstrating how the applications work. On top of his exceptional skills, I was impressed by his desire to help and contribute to the team, such as creating an animated video to be used on the team portfolio site. Even though Russ had a full work load, he was still able to produce exactly when we needed in half the time we expected. I can confidently say that Russ is a master of his craft.

Russell is very kind hearted, hard working, and brings levity to everyday moments. He makes the work environment a joy to be in. His computer graphics and video abilities are impressive to say in the least. He can easily create prototypes and videos to portray a project that brings the concept and screens to life. His knowledge in the digital and design industry enhance his creative work and the work of those around him. He is always curious, always studying, and always improving the design scene.

Russ’ attention to detail and ability to produce polished products with quick efficiency is not his only talent. He is also a personable team player with a terrific attitude. I have had the pleasure of working along side Russ for the last year and on numerous occasions he has gone above and beyond to produce work that is beyond reproach. Russ is an asset to any organization but I’m glad that we have him as part of ours.